Guy named this kind of framing after Yassir Arafat, former leader of the Palestinians, as he vowed to "push Israel into the sea." Not only is that mindset still prevalent among Palestinians, so too is it common among Israelis (thinking of Palestinians, of course, not themselves, and not literally thinking of killing them, but keeping them walled off and safely "away.") as they see no option for peace with the other side.More...

Conflict scholars use the term "framing" to mean the process of describing and interpreting what a conflict is about. Conflict framing helps the parties understand what is going on in a particular conflict and what they should do about it.

The way individuals interpret conflict is based on many factors beyond what "actually" happened. This includes the history of what has happened to these people in the past, what values are important to them, and whether they see the situation as a threat or a potential benefit. Individuals' knowledge and life experiences serve as a background that shapes their view of the world and helps them to make sense of new events.

The way one frames a conflict is important, in part, because this helps to determine what one will do about a conflict situation. Often disputants frame conflicts in adversarial or win-lose terms. They assume that they have a conflict of interests and that the only way to get what they want is if the other party does not get what he or she wants. Rather than seeking a win-win solution, they therefore seek ways to build their power so that they can force the other side to give in. When both sides do this, the inevitable result is escalation, a hardening of positions, and an increased danger of destructive or violent confrontation.

"Within a matter of weeks this past spring, the name 'Rwanda' became synonymous with carnage and violence on a massive scale. Images of executions and massacres flooded the media, shocking the international community. An organized campaign of violence was carried out, during which the Tutsi were referred to as 'cockroaches' and 'the enemy,' and Rwandan radio broadcasters exhorted every Hutu to kill Tutsi, complaining that 'graves are still only half full.' In less than four months, between 500,000 and a million people were killed." - United States Institute of Peace. Click here for article.

When two opposing groups live in the same territory, they may either seek to find a way to live together, or one or both groups may decide that the only way to resolve their conflict is to make the other group just "go away" or "disappear." This results is what Guy Burgess has labeled "into-the-sea" framing (a reference to Yassir Arafat's threat to push the Israelis "into the sea"[1]).

Into-the-sea-framing often occurs in cases where ethnic and cultural distinctions result in the formation of extreme "in-group" and "out-group" thinking, where members of different races, religions, or cultures view each other, not only as separate, but alien, evil, and often less-than-human. The formation of rigid identity groups can lead one group to become convinced that many of its problems are the fault of the other group, and that all of those problems would be resolved if only the other group no longer existed, or at least didn't exist anywhere near themselves.

The other consensus, shared by more people than I imagined possible, is the belief that they" [Palestinians] just want us [Jews] out of here [Israel]. Remember that Arafat, the winner of the Nobel Peace Prize, is the one who used to speak of "driving the Jews into the sea." He got the Palestinian Charter calling for Israel's destruction changed only under intense pressure from Clinton and, according to some Israelis, never took the steps to make those changes fully validated by the Palestinian "parliament." Now, it seems, it may be that not only does Arafat still hope to "drive the Jews into the sea," Israeli Arabs may want the same thing. Since we are not going to go voluntarily, some form of conflict is probably going to continue forever. No need to comment on how depressing that is. (Written by Daniel Gordis in December 2000, published in his collection of essays entitled Home to Stay. New York: Three Rivers Press, 2003, p. 147.)

Into-the-sea framing is the ultimate "zero-sum" or "win-lose" approach. The only way for one side to "win" is to eliminate the other side. Needless to say, this way of framing a conflict is a recipe for disaster. There is almost never a place for the other side to go, nor would they want to go if they could.[2] Framing the conflict in this way assures a highly destructive and protracted conflict that will not allow anyone to win.

This kind of framing can easily lead to genocide, "ethnic cleansing," or to efforts to force opponents into exile. The recently named "cancel culture" or "callout culture" is another example of into-the-sea framing. Someone is accused of doing something counter to the norms of the canceling person(s), so they not only call out the accused on the misbehavior (often very publicly with "Twitter storms," for instance), they try to "cancel them out" of their social circles entirely—getting them fired, getting them ostracized from their associates, their friends, their community.  In less extreme situations, this problem may lead a party to demand concessions that their opponent cannot possibly accept. One group may come to completely dominate or dehumanize an opposing group. When conflicts are approached in this way, protracted confrontation becomes inevitable. Once the contending parties have de-humanized one another, catastrophic confrontations become a real possibility.

For this reason, it is essential that peacemakers work with conflict parties to convince them to reframe the problem in terms of finding strategies for co-existence and abandon their wish to eliminate the other side.

How Can it be Avoided or Transformed?

The principles of coexistence and tolerance are important as bases for building mutually acceptable relationships between highly diverse communities within a larger society. If people of different religious, ethnic, and racial groups are to live together peacefully, they must exhibit a certain level of tolerance and at least what Helen Chauncey (of the Co-Existence Initiative) calls "passive co-existence." Here parties must make a commitment to live together while respecting their differences and to resolve their conflicts nonviolently.

One of the key ways to transform intractable identity conflicts is to humanize people on the other side and to encourage parties on both sides to realize that their opponent is human and shares many of the same values, emotions, and concerns that their own side does. (This can be done as a preventive measure, before significant de-humanization takes place, or as a reframing and humanization effort after into-the-sea attitudes have taken hold.)[2]

Also important are conflict analysis, reality testing, costing, and trust building. If people are helped to analyze the nature of their conflict with a skilled mediator or facilitator, they may come to understand that the problem is not just the evil enemy, but is rather the social system that they are both caught up in and contributing to. They can then develop new approaches for transforming or modifying that social system to get out of the entrenched conflict. 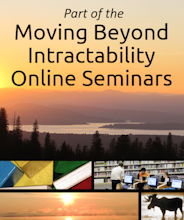 Guy named this kind of framing after Yassir Arafat, former leader of the Palestinians, as he vowed to "push Israel into the sea."  Not only is that mindset still prevalent among Palestinians, so too is it common among Israelis (thinking of Palestinians, of course, not themselves, and not literally thinking of killing them, but keeping them walled off and safely "away.") as they see no option for peace with the other side.  This mindset is also common among many other people involved in intractable conflicts elsewhere, in Africa, Asia, elsewhere in the Middle East and in the United States--it exists essentially everywhere!

Whenever one assumes that it is impossible to live with the other, then one has to "get rid of the other," or get rid of oneself.  The most common example of such an approach is marital divorce.  The spouse isn't killed, but is pushed away as much as the courts will allow.  Political secession is another example.  So too is the attitude that many of the right and the left in the U.S. seem to be taking towards one and other.  Neither seems willing to share this country or compromise moral grounds; rather each side is trying its hardest to inflict its morals (and hence its policies) on the other, and if they don't like it, they can simply leave.  (And some--undocumented immigrants--are indeed, being forced to leave.) This is into-the-sea framing.

Back to Essay Top

Metagraphic: Dunkirk where Allied forces were literally being pushed into the sea by the Nazis in World War II. Source: https://commons.wikimedia.org/wiki/File:Dunkirk_26-29_May_1940_NYP68075.jpg; Permission: Public Domain

[1] This quote has been circulating for years. We found it in print, however, in the excellent chronicle of life in Israel, Home To Stay, by Daniel Gordis. New York: Three Rivers Press, 2003.

[2] In addition to the essay on humanization, see the interviews with Columbian peasants who described how they humanized the violent extremists in their country in order to reduce the level of violence and try to transform the conflict there into a nonviolent one.

More from
Beyond Intractability

Our inability to constructively handle intractable conflict is the most serious, and the most neglected, problem facing humanity. Solving today's tough problems depends upon finding better ways of dealing with these conflicts.  More...

Get the Newsletter
Check Out Our Quick Start Guide

Join Us in calling for a dramatic expansion of efforts to limit the destructiveness of intractable conflict.

Things You Can Do to Help Ideas

Practical things we can all do to limit the destructive conflicts threatening our future.

An look at to the fundamental building blocks of the peace and conflict field covering both “tractable” and intractable conflict.

Beyond Intractability / CRInfo
Knowledge Base

Disclaimer: All opinions expressed are those of the authors and do not necessarily reflect those of Beyond Intractability, the Conflict Information Consortium, or the University of Colorado.

Beyond Intractability Essay
Copyright © 2003-2017 The Beyond Intractability Project, The Conflict Information Consortium, University of Colorado;
All rights reserved. Content may not be reproduced without prior written permission.
All Creative Commons (CC) Graphics used on this site are covered by the applicable license (which is cited) and any associated "share alike" provisions.

"Current Implications" Sections
Copyright © 2016-17 Guy Burgess and Heidi Burgess
All rights reserved. Content may not be reproduced without prior written permission.